The Norse (or Viking ("Berserker") was a type of Warrior that was known to exist in the 1st Century AD. Many Historians have found great difficulties in separating "Fact from Fiction", regarding their origins and "authentic" Fighting nature. Norse Warriors were well known to early Europeans as Raiders and fierce Fighters. The Norse Military ethos was linked to it's Relgions practices. From The Norse word "Ber-serkir" or "Bear Shirt", these specific Warriors were selected from those same with proven experience in combat. Set apart from other Warriors, they slowly developed a "Cult" status.

The Berserkers, prior to battle would "pray and chant" to their particular Gods. They would place themselves into what many Historians feel was a Trance-like state of "altered perception". It is unclear if herbal assistance was used to maintain such trances. Once prepared, The Berserker was an unstoppable "killing machine", that knew no fear and could apparently continue fighting even when mortally wounded.

Noted for their Bear, Wolf, Elk and Ram full pelts, the heads of these animals were hollowed out, with the jaws set open wide. These were worn over the face and head. The remainder of the hide extended down the back. For all purposes, The Berserker appeared to be the visage of the animal (and embodiment of it's Spirit).

Using standard Norse weaponry, The Danes Axe was perhaps the most popular. Although The Berserkers did not survive the eventual decline of Norse Society, their "mantra" would. Their name would be associated with "Wild" and "Daring" Soldiers for Generations. 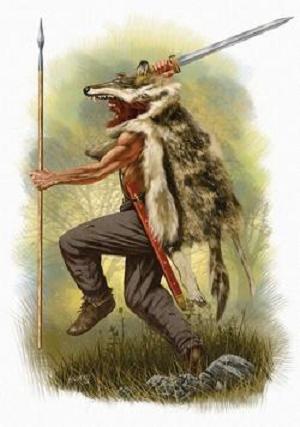