The Normans (aka Northmen or Norsemen), were Scandinavian Vikings who raided and then settled in Northern France during the 900s. Although they left their “Pirate ways” and adopted Commerce and customs, they did not end their zeal for adventure and expansion. Around 820 A.D. The Vikings had started raiding The French Coast (penetrating deep into the Country via The Siene River). Ending in 911 A.D. When King Rollo of The Vikings entered into a treaty with Charles The Bald (for monies and land). Settling into Rouen, most converted to Christianity. Rollo's descendants would become Dukes of Normandy who (by that time), commanded great wealth from trade and taxes within the Region.

During the reign of Duke Richard II, social stability and intermarriage quickened Norman assimilation. They also spurred fervor in their “new found” religion. Many churches and Cathedrals were built as a result. From the end of Richard II reign to around 1050, Normandy became torn by internal feuds and power struggles. With the rise of Duke William I (aka The Conqueror), the feuds would be pacified and unified throughout France. William had his own goal – the conquest of England.Illegitimate Son of Robert I, William fought for 10 years to claim his right.

With the death of his Father in The Holy Land, he had left William the claim. Robert's family was another matter. Allied with The French King Henry I, much blood was spilt before William could begin his “gathering of Lions”. The end result (prior to England), was the control of Maine to Brittany. Marrying Matilda of Flaunders provided his “support” from the Eastern Kingdoms.

By 1060, the stage was set. When England's Edward The Confessor died without an heir – William acted. His massive Fleet of ships and thousands upon thousands of men landed in England. Not to be undone, an English “Pretender” - Harald of Wessex (former Earl), announced to The World that HE was King of England. On October 14, 1066 – The Battle of Hastings erupted with steel and spilt blood. Harald lay dead and 10 weeks later (in Westminster Abbey), William was crowned King of England. Language, culture and society was forever changed as a result. Spreading outwards to Northern Italy, small enclaves of Normans vied for superiority over local Dukes and Barons. Greek territories were even exploited. Normans were everywhere, establishing their particular culture and beliefs. Although eventually removed from their power, The Norman “footprint” in Italy and parts of Greece are still very evident. 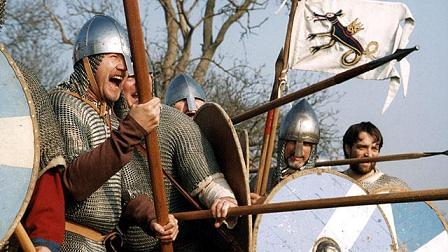