The second most identified symbol of Germany's Military Forces, dating back some 100 years in "modern" History, The Nordic Cross actually goes back to the 10th Century. Used as a symbol of the Military Order of Teutonic Knights in the Middle Ages, many Nations and Kingdoms adopted the symbol ad part of their "National" identity.
Shown as a Black Cross with equilateral bars, in the 19th Century a White border was added (by way of contrast).
The Nordic Cross became the principle Symbolism of the Imperial German Airship Corps. in World War One. Later, Nazi Germany also incorporated The,Nordic Cross as it's principle symbol for most of it's military assets. 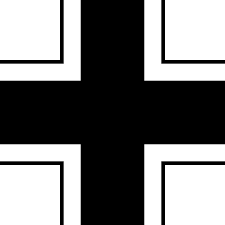