The Nordenfelt Gun was a multi-barrel "Organ" gun (so named due to it's resemblance to the musical instrument). Invented by Swedish inventor Helge Palmcrantz around 1873, this weapons featured a row of 12 barrels. Firing operation was accomplished  by a lever which would be pulled back and forth (thus creating a rapid cyclic rate of fire). Typically, firing a .45 caliber series of rounds - this weapon was very similar to The Billinghurst-Requa Gun of The American Civil War. The weapon was said to have been able to fire up to 3,000 rounds per minute (much to the credit of the Operator!). Sold to several European Armies, The Nordenfelt was used by The British during The Sudanese War of the 1880s (especially during The Siege of Khartoum). With the invention of The Maxim Gun, The Nordenfelt would quickly fade from use. 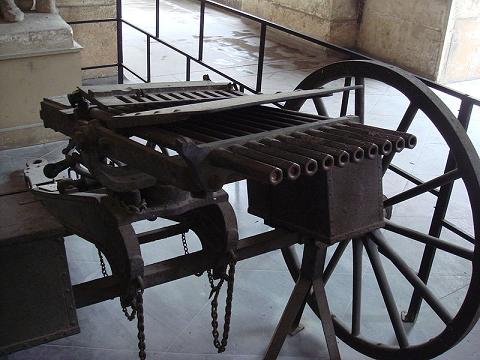