Located in Trondheim, Norway – Nidaros Cathedral was constructed between 1070 and 1300, over the spot where the 11th Century King of Norway (King Olav) was said to be buried. The Kings of Norway were all installed on their Thrones at Nidaros. In 1152 A.D. Rome designated Nidaros as a Catholic Archdiocese. It remained as such until the 1537 Reformation. Under Lutheran control, the structure still bears the traditional “cross” shaped foundation. It features twin Bell Towers with additional twin Altars. The Main Altar reliquary still holds the remains of King Olav.

The Interior of Nadarios is constructed of three Arches, with the larger primary Arch in the supporting Center of the Cathedral (flanked by two smaller ones). A statute called “Christ The Teacher” (from the 15th Century)- features prominently over the Central Arch. A natural spring existed under the Cathedral from which water could be drawn via a bucket. The spring was sealed in the 18th Century. Nadarios Cathedral has several surviving foundations on it's grounds which may have been Religious Order Houses at one point. The Cathedral Houses an excellent Middle Ages Reliquary collection. 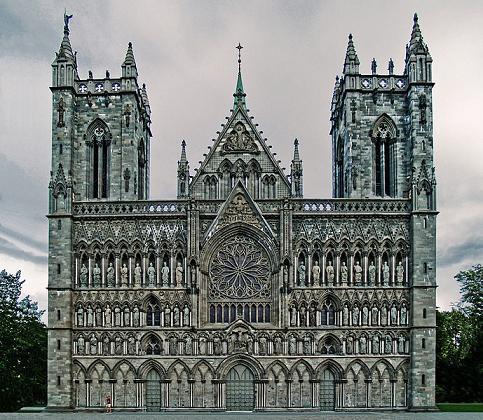