Raised in 1835, The ''New Orleans Grays'' was a Volunteer American Militia. They consisted of two Companies (120 Officers and Men), and came largely from The City of New Orleans, Louisiana. The Formation was part of several other Gulf Coast States that wished to support The Texas Rebels in their bid to declare Texas a Republic from Mexico. To many, The Rebels were very much as their Fathers had been against Great Britain during The American Revolution. As such, the small ''Army of Texas'' (a rag-tag collection of poorly equipped ex-American Volunteers from all walks of life), needed help. Many Southern American States began to call for Volunteers to help in that fight.

The United States, while sympathetic – did not (or was as of yet, unwilling) wish to fight a War with Mexico. While many ''border disputes'' had in fact ''played out'', The American ''Army'' as still reorganizing since The War of 1812 (with many of the 30,000-odd stationed on The Western Frontier. When word of Revolution came, The US turned it's back, but supplied as much weapons as could be smuggled into The American South. These weapons and other materials would help supply such Militias as The Orleans Grays.

The largest of The Volunteer Militias that fought in The Texas Revolution, The Grays arrived in several ships via The Gulf of Mexico. The Grays were far more disciplined and organized – with most having served in State Militias. They could not officially wear Federal Uniforms, but instead wore US Cadet Gray Uniforms, hence their nickname ''The Grays''. Both Companies were equipped with US Infantry Rifles and accouterments. The Grays even brought with them an 18-Pounder Cannon (foolishly forgetting to also bring the proper shot!).

Splitting up, 25 were sent to support Colonel William Travis and his small command at a broken down and abandoned Mission near The Town of San Antonio de Bexar. Nicknamed ''The Alamo'' by it;s defenders, all of The Grays would perish with the rest of Travis' command after a 13-day Siege of the Mission-Fort. Other would die in the series of smaller engagements with The Mexican Federal Army of Dictator Santa Anna. Only (7) would survive to join General Sam Houston's Army at his decisive victory over The Mexican Dictator at The Battle of San Jacinto (1836). 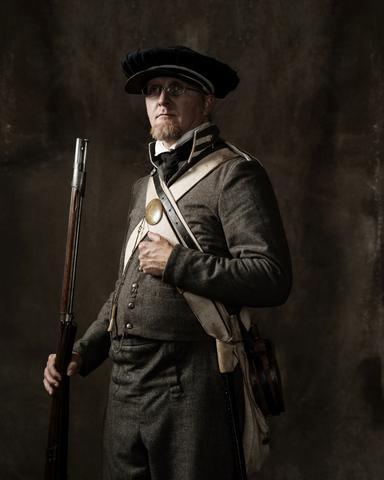