Born in London, England around 1690 – Edward “Ned” Low was born into poverty and started out a life of crime at an early age (a thief at 12). He Emigrated to The American Colonies and married. His wife and child died in childbirth. It is unclear if this was his catalyst, but 2 years later in 1721 – he turned to Piracy. Low has the reputation for being one of the most evil and vicious of “The Golden Age of Pirates”. Often killing his captives, he enjoyed torturing them first! Captain Low maintain as many as 4 ships in his Pirate “Fleet”, and is credited with burning and sinking well over 100 ships. Although he terrorized the Seas for only 3 years, he was more feared that some of his contemporary Captains (some of whom even shunned him for his cruelty). Low's primary vessel was named The“Fancy”. After a heated battled with HMS “Greyhound”, Low lost his right-hand in battle. He decorated his stump with a hook (possibly one of the first to use the Pirate iconic symbol). After this, Low's already “evil disposition” got worse. One story tells how Low “slow cooked and fried” a captured French ship's Cook and later tortured The French Captain “joyfully” before shooting him in the head. He was also known for setting captured crews adrift without food or water.

Various versions (or legends) are associated with just how Captain Low met his fate. The most common theory was that he and his Ship went down in a hurricane off of Brazil, South America. Another, was that he survived the storm, changed his name and lived in obscurity in London until he died an old man. The French (who had a major issue with him over his cooking practices), stated he was captured and hung in 1724 (although no grave or records exist). 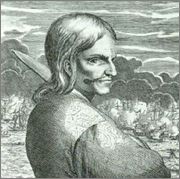