As innovative as were The Ironclad warships and primitive Submarines, Naval mines in The American Civil War, were born out of necessity. The boon in growth rests squarely with The Confederacy. Quickly encompassed by President Lincoln's Naval Blockade (of hundreds of US Navy ships), The South's main source of survival rested with foreign imports. Blockade Runners were effective (but were becoming scare). Called “Torpedoes” in America, these devices were often specially made wooden (for floating) – barrels or casks. Waterproofed (sealed), they could be filled with enough powder (in some cases several hundred pounds). Often anchored in harbors (for defense), or allowed to “free float” (for offense), they were activated by “trigger fused”, incorporated throughout their wooden “hulls”.

When struck by an enemy ship's hull, the resulting explosion could effectively sink or severely damage a ship. Some larger examples were even towed behind ships (and cut free to float). The South often used Mines to protect their Harbors. This was more evidence at the famous Battle of Mobile Bay (Alabama), when Union Admiral David Farragut uttered the immortal phrase “Damn The Torpedoes, Full Speed Ahead!” Seen somewhat “cowardly” by some, Naval mines were extremely effective in disrupting the Union Blockade (to a degree), and highly effective in Southern Harbors and rivers. Many Union Gunboats fell prey to them. The would be refined over the centuries and become a valuable tool to many Naval Forces throughout the World. 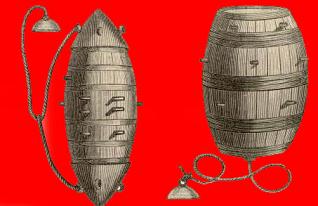