A traditional Native American weapon, The Tomahawk evolved over many thousands of years of evolution. Originally featuring a stone head (of various styles and shapes – depending on the Region or Tribe of origin. Some examples (heads) have been dated back as far as 10,000 years. Among Native American Tribes, first stone, then flint was fashioned. Often razor sharp, a Fighting Hatchet or Tomahawk (English translation) – was used in war.

Heads were placed on handles (varying in length from 1.5 to 2 feet long). Securing techniques involved notching and sinew or leather strap wrapping. With the advent of Trade with other Tribes (particularly European Tradesmen), the old Flint and stone heads were quickly replaced with forged ones. These weapons were often highly decorated and reflected the Warrior and Tribe in question. Most Northern and Central Plains Tribes relied on this weapon as a close quarters weapon until the advent of firearms within many Tribes. 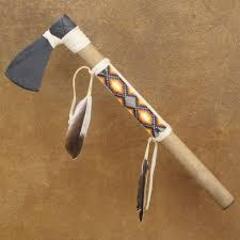