Also known as “NATO”, this is The Flag of The “Military Arm” of The United Nations. NATO originally was formed from (9) European Nations, Canada and The US. The Flag, which was flown over NATO Installations, was primarily used by Naval Vessels (Warships). It is currently rated at 29 Member Nations. A Blue Field, Centered was a Map Compass icon in White (countercharged). White Lines extended from the “points of The Compass”. The image represented “All Points of The World” of which NATO protected. It was first flown in 1949, and still in use. 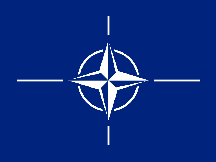