Although The Lance as a weapon is many centuries old in Europe, it was also developed by Native American Tribes in America. Designed along similar lines, Lances were traditionally not thrown. Often confused with The Spear, most “Horse Tribes” used some form. Made of various types of Regional wood, Lance's could be anywhere from 4 to 6 feet long. Different composition types were used for Lance Heads (again depending on the Region of development). Stone then Flint (properly carved or chipped) were often used. Notched at the base of the Head, a slight indentation (or splint was made in the Lance's upper shaft). Fitted, a series of animal sinew or leather strapping was stretched (then wetted), then wrapped again. This created a solid, well fitted Head that would not break when used. From horseback, a Warrior would use The Lance in a thrusting and stabbing motion. Heads were often large (4 to 5.5 inches and flanged wide) – to produce maximum injuries.

Often elaborately decorated (again depending on the Tribe on origin), they also served a Ceremonial function. They were used to denote a Chief or War Chief. In many cases, these types of Lances were passed from Chief to Chief. Decoration was often a form of symbolism with regards to The Lance's history. Battles or engagements were marked by various bird feathers or pieces of animal hide. Sometimes bone fragments was used. 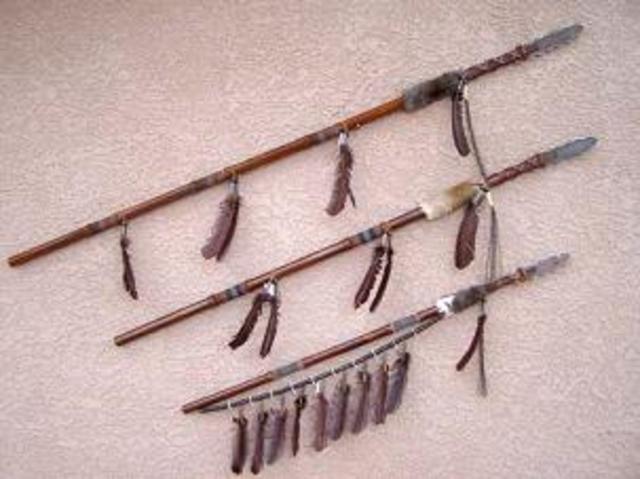