Centuries old, The Native American practice of “Hide Art”, involves the stylized painting and drawing of images and related iconography of important Events in The Tribes or Artists life. Hide Art was indicative to The Great Plains Tribes. The medium of choice was animal hide or skin. Only the treated or “cured” side was used. This was the “Bottom” portion of the animal. The “Upper” was left uncured, with full fur. Often the general “shape”  the animal was left intact.

Generally, the larger the animal, the better the “canvas”. Elk, Deer, Bear and of course, Buffalo were preferences. However, examples found include Fox, Badger, Wolf and even Raccoon. Using methods very similar to Medieval Paint Makers, organic sources were used. Various “soft” and “wet” (or pulpy) plants, flowers and such were used and “mixed” with water or other organic fluids. This produced a kind of paint. Some examples have maintained their colors for hundreds upon hundred of years.

Such important Events such as deaths of Chiefs, Shamans, Wars or “good” Hunts, were recorded in somewhat meticulous detail. Even many Tribes first encounters with “White Men”, were replicated. Native Americans did not maintain a “written History”, per se. Most of their tradition was Oral. Hide Art was seen by many Historians as rare example of “saved” History of Tribe. The style would eventually even cross over into Buckskin Clothing. Often these Hides were painted for important ceremonies such as marriage. By the early mid-19th Century, Hide Art had mostly been replaced by a unique style of Native American of similar work, known as “Ledger Art”. 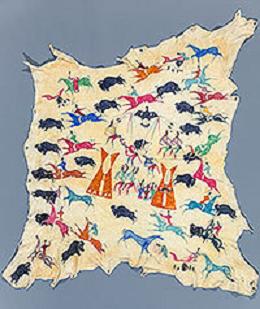