Also known as The ''Sikhali Mounted Horse'', were the Mounted Branch of the previously discussed Native Native Contingent. These were aligned Tribes serving with The British Army as Irregular Infantry. The Mounted Contingent was the first Black Mounted Cavalry deployed in 1879. (5) Companies (250 Officers and Men total). While a few Tribal ''Black Corporals'' were instituted – all NCO Sergeants and Officers were ''White''. The Mounted Contingent was commanded by British Officer Colonel Anthony Durnford. The Troops were formed from The amaNgwane (a Tribal Enemy of The Zulu). Many of The Tribe were used to Horses (with some even using them on their Farms.

Better trained than The Infantry Branch, The Natal Mounted Contingent wore uniforms. These were ''Khaki'' Tunics and Trousers (although Brown and Black were known as well). Some Troopers wore boots, others preferring to go ''barefoot'' (as African Warriors were more comfortable to do so). The ''Bush Hat'' was issued with the ''Red Scarf'' tied around the Crown (White Officers did the same). The Troop was well and regularly trained in tactics and had a ''strong attachment'' to Col. Durnford. Along with their tradition Spear, Durnford ''pushed'' for His Troopers to be issued Carbines. This met with resistance from The Army High Command, who while relenting to Durnford only issued each Trooper 5 rounds of ammunition.

The Mounted Contingent fought bravely with Durnford at Isandlwana (with many perishing with Him there). They would continue to fight thru The War. Maintained as a Frontier Force merged with The Natal Mounted Police, they would sight in several small rebellion as well as both Boer Wars. They would be completely merged (identity) with The Mounted Police after 1902. 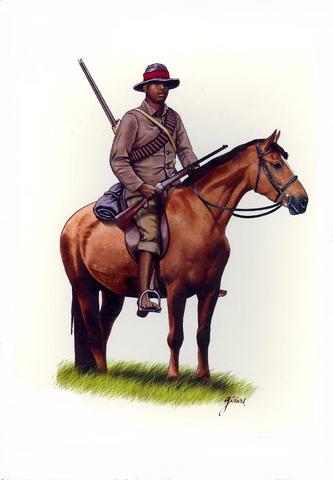