Napoleon Bonaparte was one time Emperor of France and self-proposed "Ruler of Europe". As we have previously seen, he had many different types of bladed weapons (Swords).  Although attempted assassinations on his persons were attempted, his elite bodyguard and others kept him safe. Still, accidents "could" still happen. Napoleon commissioned Master Gunsmith Jean Gribeauval of St. Etienne, France  in 1806, - to construct a personal firearm for his use. Manufactured in an impressive .50 caliber, this "hideaway" piece had a 7-inch barrel and was flintlock activated. Befitting a Emperor, the barrel was Gold plated with a Oak handle. It was never fired in his personal defense as far is known. It is currently in The Louvre Museum, in France. 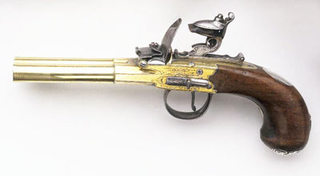