“Napalm” is a linguistic blending of two chemical compound processes used to describe Napththenic Palmitric Gel. A thickening Agent (which was originally a dry powder), solidified and became sticky when mixed with Gasoline. The origins of Napalm is directly linked to Ancient Greece and the Naval Weapon “Greek Fire”. Refined during World Wars I and II, it was the primary fuel source of early Flamethrowers. It by World War II, with rubber shortages (a key component), that a chemical compound was developed as a replacement. During The War, Napalm was used heavily by America against Japanese targets from the air.

The sticky, semi-solid compound is noted for it slow oxidation when exposed to air. As a result of slow burn, injuries and damages were greatly enhanced. Further, water generally does not initially work as an extinguishing Agent. As such, structures are difficult to extinguish flames. Contact with human flesh is most often fatal or permanently disfiguring. Napalm was used in both The Korean and Vietnam Conflict with great regularly (1966-1970). It was also used as a Jungle defoliant. So effective from a psychological warfare perspective, that The United Nations once considered banning it for use in combat. The average Napalm Bomb ranged around 1,000-pounds.

The US Navy also revived it as “Greek Fire”, when some of their River Patrol Boats were outfitted as “Floating Flamethrowers”. Used  on Vietnamese Rivers, they could fire their chemical into Jungles and possibly Enemy Troop Positions. Although the Napalm compound has greatly changed over the Decades, Napalm is still in The US Military Inventory today. 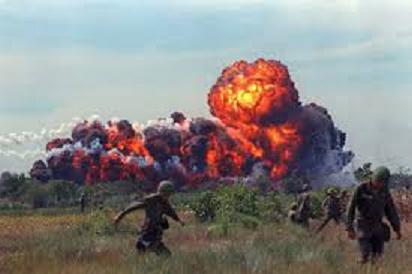