Located in Nagoya, Central Japan – Nagoya Castle was one of the most important fortifications of The Edo Period (1603-1868). This was the height of the “Shogun Period”. Castles in Feudal Japan took on an elaborate and stylized appearance. Built for a Noble Family (Ujichika), it was later besieged and taken by a local Shogun (military commander). In 1610, it was heavily renovated to include massive military structures (in particular it's Southwest and Southeast Turret Towers). Featuring Enceintes, it also featured an Inner and Outer Wet Moat System.

A large 4 level Donjon was constructed at the top of the mountain, surrounded by multiple lines of thick (15-foot) perimeter walls. Designed to accommodate a larger family of over 30, Nagoya Castle also included domestic quarters for over 200 workers and a large garrison barrack (which could fit over 400 soldiers at any given time). Although later (17[sup]th[/sup] Century) military renovations such as Firing Loop Hole were added, no major work was done to accommodate cannon (except at basin or ground level).

Nagoya Castle sits some 300 feet above sea level. The structure also featured 6 Gates (and several Drawbridges). The Donjon was elaborately decorated with solid golden Dragons (positioned on it's roof). In addition, golden Dolphins were placed there (but were completely destroyed by American bombing raids in World War II). They were “replaced” by copies in 1959. Nagoya Castle survived remarkably well during the bomb raids. Nagoya Castle is also known for some of the finest contemplative Gardens, Ponds and related agriculture in Japan. Nagoya Castle is one of the more popular Visitor destinations in Japan. 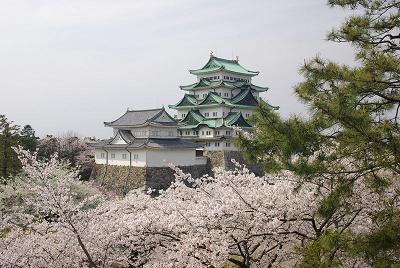