In The Middle Ages, “most” people could not read. Even if they could, books were expensive (even with the advent of The Printing Press). Most had to rely on education and stories related by The Church. Priest's and Clergy told tales from The Bible (as a form of instruction – for and against, something). However, this was always a daunting task to keep people interested in The Bible (and in many cases UNDER control), as The Church would have it. Traveling Actors and Theaters (of sorts), were also not a new idea in The Middle Ages. Troups (as they were called) – of Traveling Performers (often with musicians), would come to a Town or Village and “perform” Plays. Most of these “stagings”were based on popular themes of the day (Courtly Love, Brave Knights or famous Battles). The Church saw an immediate use for these ”instructions” (as it were), and devised “The Mystery Play. Mystery Plays were stagings that portrayed Biblical Elements. They “acted out” famous Biblical tales in such a way that even an uneducated Common Surf could understand. Tales dealing with The Life of Christ, Damnation, The Garden of Eden, The Flood – all were suitable fodder. In many cases, Troups would have to be “approved” by the local Bishop. Often, quite “elaborate” productions using primitive “special effects” were employed (to the delight and fear of the Audience). The Church would even use the Plays as a way to “sell Indulgences” to the Audience (as was first used to “raise” monies for the initial construction of The Basilica of Rome). Mystery Plays would continue through The Middle Ages (becoming even more sophisticated) well into The Renaissance Era. “Modern” versions are still performed even today. 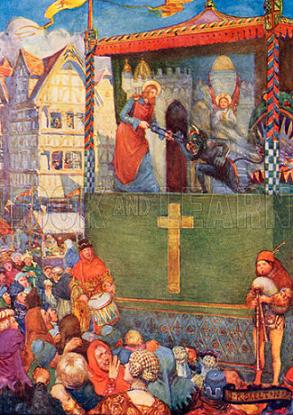