The Mysorean Nation was located in the lower Southern portion of Indian. The Nation was a warlike, Muslim Nation, which held sway over the region and it's Coastal waters. Attempts by The British East India Company to establish trade relations (and Colonies), went wrong – leading to The Anglo-Mysorean Wars of the late 18th Century (and early 19th  Century). The Mysores used many weapons that were similar to The Ottoman Empire. On innovation was their development and implementation of functional Rockets for warfare. These weapons were primitive (yet effective) against British soldiers and ships. So much so, the idea for the English Congreve Rocket System was incorporated from The Mysorean devices (with considerable improvements).

The Mysorean version consisted of an iron tube with an attached bamboo stabilization probe which was positioned into the ground or mounted on a firing platform. Trajectory was accomplished by the angle of placement. The tubes were roughly 8-inches long. They were reinforced with Bamboo wood. The black powder propellant would be ignited to fire a 50 to 100 pound shell outwards of 400 yards (with some models cited at 1,000 yards). Another ingenious device constructed by The Mysore's was “The Fire Breathing Dragon” Rocket device. Basically it featured 3 rocket tubes connected and mounted on a small gun carriage. The result was 3 rockets launched (although accuracy was highly doubtful). 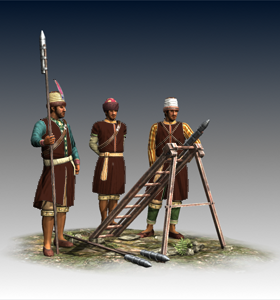