Not traditionally a Helmet (but used the same), The Misurka was popular with many 10th thru 14th Century Muslim Units during The Crusades. Designed to afford protection to the head (but give the Wearer more vision and movement abilities, the component consisted of a Chain Mail Cowl that was connected to a form fitting circular (Turban-like) “Crown”. Made long to drape over the upper shoulders, The Misurka often had a type of Coat Plate (iron plating), fitted into it's exterior. This gave more protection. The dome (or Crown), was a solid iron piece with several layers of Mail fitted around it's perimeter. This Mail was completely covered (or reinforced) – with similar Plating. Many of the Muslim Warchief Saladin's Cavalry used The Misurka. 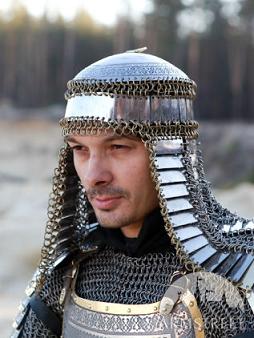