Much overlooked by Historians, the use of Music in The American Civil War was as important as was the movement of Troops and the winning of Battles. The development of what is deemed “Martial Music” is as old as the first battle of Ancient Warfare. Used to mark steps via a “beat”, it also served to inspire and rally. Much of the music and songs of America’s Civil War was based on much older European songs and ditties (rhyming tunes). Most developed from religious standards which were a part of most people’s lives in the 19th Century.

With the rise of Patriotism for The War on both sides, a “Cottage Industry” (of sorts), developed to capitalize on The War. Literally thousands of songs and music were turned out for The Public and Soldiers as well. Songs dealt with Honor, Separation, Loss, Death and Victory. The basic component of Civil War Music centered around the instruments themselves. The Piano, Violin and Cello were all acceptable form of play in many households. Even the Poor adapted these songs with Fiddle, Harmonica and the unique “Jew Harp” (a type of metal mouth and hand operated spring device which created a vibrating resonance or sound pitch). Of course, The Guitar and Banjo were staples as well.

In the Field for The Soldier, it was Fife and Drum. Handmade Guitars and Banjos were fashioned. Possibly the best used was the highly portable Harmonica. Music came in handy before or after an engagement for psychological purposes as well. As previously discussed, such “Camp Bands” served a vital purpose. Company and Regimental Bands too, served such a purpose on “The March”. Simply put, the many hard walked miles were made somewhat easier, thanks to such songs. Many Songs became standards which are still well known, even today. The strains of the Southern battle song “Dixie”, stirs as much emotion as does The North’s “Battle Hymn of The Republic”. The Civil War, while often referred to by many names, was truly one of America’s first Conflicts in which music played an important role. 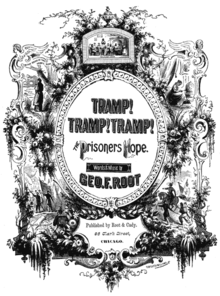