Given a special Charter to engage in trade with Russia, The Muscovy Trading Company was an English Merchant concern, founded in 1555. Concentrating on the fur and whale trade, they also moved into The New World Colonies of England (America), as well. They wre identified by these colors. A Banner by design, it featured a Royal Standard motif (Queen Elizabeth I – granter of the Charter). The upper left Canton and lower right featured the Fleur-de-Lyis of France against a blue field. The upper right and lower left Canton featured the 3 gold lion design of Plantagenant. A large red Cross was superimposed over the entirety of the banner. Although officially ended in 1689, The Company would be resurrected again in 1917 briefly. 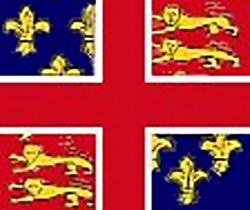