The Middle Ages was a great “producer” of the Art form known as Mosaics. Although the style is actually many thousands of years older, the form flourished with the rise of Christianity throughout Europe (and The Middle East). A true Mosaic or “Buon” is any wall or vault that is covered in a fine to medium layer of plaster. This substance serves as the “base” for the Mosaic. A rough “sketch” of the proposed “work” was made on the plaster. Yet another finer layer of plaster was applied (which allowed the sketch to still be seen). From this point Craftsmen would chisel and cut small square pieces of colored Marble or Glass (each section more or less the same shape and dimension). The pieces would be carefully placed within and around the sketch. After many months (in some cases), a brightly colored image (which gave the appearance of depth) – was revealed. It was predetermined that through the use of the technique of “Giornatte”, a “section of varying width and height” was produced per day (such as a Quota). Gradually replaced by The Fresco (which was faster and cheaper to produce), many still surviving examples of Mosaics from The Middle Ages, still exist. 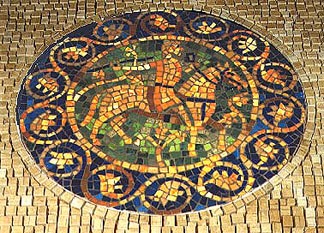