This Device was classified as any Club-like weapon with a spiked head (1 spike to several). Yes, it sounds suspiciously like a Mace, but it was a different weapon-type. The arrangement of the spikes or related protrusions - often in patterns, gave the weapon it's star-like appearance. Often the head could be elongated or a simple rounded ball.

It's principle difference was that this device was often mounted on a Pole Arm. 6 to 8 feet for infantrymen and 2 to 4 feet for cavalry. It's development arose between the 13th and 14th Century. Most Middle Ages armies had some form of this weapon in it's arsenal. 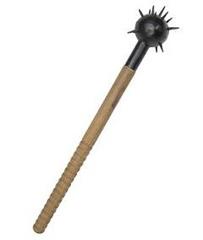