In Helmet classifications, the Morion is perhaps the most recognized of it's type. Often called "The Conquistador" (due to it's fondness of use by early Spanish explorers), the Morion was initially made for their early expeditions. The style grew in popularity (so much so), that many Nations adopted them as their primary protective head gear. In England, during the reign of Henry VI - the Morion was widely issued. The helmet (initially iron then steel), was constructed of two components. The top piece was larger and somewhat fatter (encompassing the whole head).

Often a crest or fin was installed on the top of the Morion, which often ran the length of the top of the helmet. This served as added protection to the wearer from sword blows. A bill was added protection to the wearer and was also not considered decorative. The bill extended some 2 to 3 inches outward - extending from a point in the front to a point in the back. Some variations had hinged side-plates attached to add protection to the ears and small portion of the upper neck. Sometimes called "The Kettle Hat" as well, this name is often confused with another helmet of the same classification.

The Moorish warriors used a very similar type of helmet that some historians think - may have given the idea to the Spanish. In England, the Morion was dubbed "The Pikeman's Pot", wand was popular on both sides of The English Civil War. A classic current example of the Morion is that it is still the official headgear of The Swiss Vatican Guard (Rome). 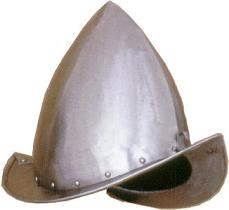