The ''Morality Play'' was a popular form of Tudor Era (England) entertainment – performed on Stage by Actors, which sought to give ''thought'' to the ''Basic'' Christian Virtues as well as the merits of Justice (from both God and Man). Morality plays were seen as ''cautionary tales'' which showed how One might ''live their live'' in ''true Christianity'' or be condemned to ''Eternal Damnation'' – by the Law of God, enforced by Man. Morality Plays were among the first to personify ''Justice'' by an actor wearing Judiciary Robes and other trappings of Justice (then used). The Plays were every popular with England's Queen Elizabeth I, and were often used as mock Political venues to show rebellious Subjects the ''evils'' of Revolt (of which The Queen experienced several times during Her Reign). However, The Plays had an opposite effect in causing fear among those who came to see Judges of Legal Proceeding as being too powerful and often jaded towards The Common Man. From a Religious point of View, The Morality Play harkened back to the 14th Century AD ''Mystery'' and ''Passion'' Plays performed to show ''how'' damnation awaited those who transgressed from both God's and the reigning Monarchs ''good Rule''. 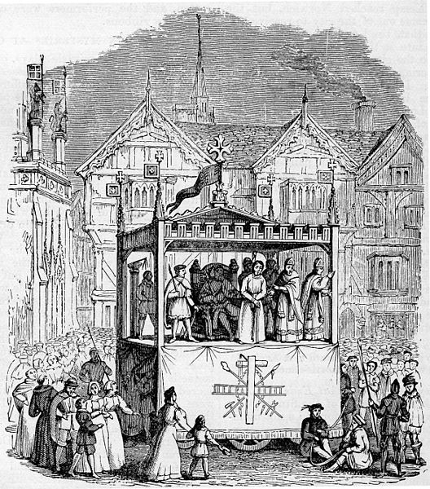