This Medieval Bombard cannon was built in 1449 as a gift from Philip (Duke of Burgundy), to King James II of Scotland (1459). Although it allegedly participated in several sieges, it was used primarily as a ceremonial salute weapon. This massive weapon was kept at Edinburgh Castle in Scotland until 1754, when all "unused weapons" were taken from Scotland and stored at The Tower of London - in England. Lobbying for the guns return (as it had become a tradition in Scotland) - was Sir Walter Scott. He successfully had Mons Meg returned to Scotland in 1829. Mons Meg is truly a massive weapon. Her name has been hotly debated for Centuries (anywhere from Margaret of Denmark to the Village of Mons, France - no one is quite sure). What is sure is that she could fire a 400 pound solid iron shot and had a 20-inch diameter barrel opening. Meg is 15 feet long and weight in at an astonishing 15, 366 pounds!. She is considered by some as being the largest caliber weapon in the world (at 510mm). She could only be fired 8 to 10 times per day (due to the enormous amount of heat the burning powder generated). In her early days as a Royal weapon, Mons Meg was painted red (as an anti-rusting agent). She was originally mounted on a standard gun carriage made of reinforced wood with 4 wooden and iron wheels. When fired, it was claimed that Mons Meg had to have rounded tree trunks placed under her wheels to stabilize her. The last time she was fired was in 1680 (when an overcharge burst one of her barrel chamber retaining rings). She is still on display at Edinburgh Castle, in Scotland. 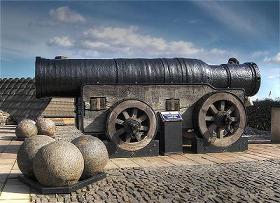