Another staple of traditional Men's Medieval clothing - was The Monk Cowl Mantle. Incorporated in basic commoner fashions around the late 13th Century, these pieces of apparel were based directly upon the type of outer garment worn by Monastic Orders. Often referred to as a "Cistercian Cowl" (somewhat incorrectly), unlike their religious counterparts, these pieces were not designed to extend much past the Upper thigh of the wearer. Similarly, they often featured no sleeves. The Hood and cowl could either be attached to the garment or simply put on at the wearers need. The basic design of The Monk Cowl was such that (as it was made of both wool and the material known as "Coarse"), it was ideal for a Peasant worker. This was made more so by the lack of sleeves (which provided for excellent range of arm motion). The Monk Cowl Mantle also found it's way in some military usage, especially by Archers. The design would fall out of favor by the mid-15th Century. 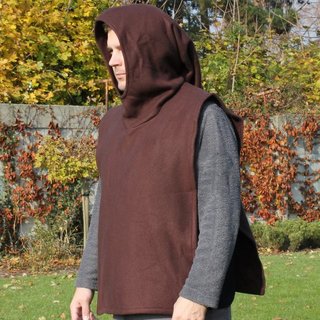