These 19th Century weapons were multi-barreled volley guns, capable of firing in rapid succession or multiple rounds at one time. Developed in 1851 by a Belgian military Officer, The Mitrailleuse pre-dated The Gatling Gun (US) by 10 years. In 1866, The French had developed their own rapid fire gun. These (as well as other "Rapid Fire Guns") were considered prototypes by most Governments (with very few of them committing the time or monies into mass production). Most often considered "secret weapons", the first true mass produced and well tested multi-fire weapons system was the US Model 61 Vulcan Gun (of World War II). The Belgium Government only built 400 Mitrailleuse (selling most of them off to other Countries). The weapon, which was carriage mounted - weighed 750 pounds. With the combined barrel and other hardware applied, this weapon easily hit 1,880 pounds. This weapon could fire about 100 rounds per minute. Crank operated, the rotation would slowing spin the barrel configuration in a circular motion. At the same time, with the spin - a firing pin would engage back and forth. This motion would strike each bullet primer in each barrel. A box of ammunition (with a gravity drop hole), would provide the weapons "feed". Misfires were very common and barrels would have to be switched out and "rodded" quite often. This process was time consuming and contributed to the weapon not being seriously produced. 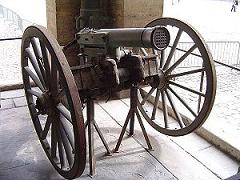