No more iconic of an image of The Middle Ages, was that of The Minstrel. These Groups of traveling "Performers" were a staple of Medieval Life. Although such Performers did not begin in The Middle Ages, they were certainly refined  (and defined), by The Era. A Minstrel  (most commonly a Male), was a multi-talented Performer. One could not just be solely as "Singer of Songs" (as Films often portray him). A "good" Minstrel played musical instruments, performed Magic, and even performed various Acrobatic stunts.

First documented as early as the 9th Century AD, most Nations had them. There were two principle types. The first, was a Public Performer. Either singley or in a "Troupe" (multiple Performers) traveled from Town to Town - plying their talents (normally in Public Squares). Attracting a Crowd, usually one of the Performers placed his Hat on the ground in front of The Troupe. This "encouraged" The Crowd to throw coinage into the Hat (by way of payment). It is from this, the phrase of "Passing The Hat" originated.

The second type of Minstrel was the Private Minstrel. These were Performers hired by Nobility or Royalty, for the purpose of providing Entertainment for either Guests or The Family of The Benefactor. Often (in cases of Rotalty), these Performers were contracted to actually reside within a Palace or Manor. Their payment was their room and board (although a small stipend was still given).

Expert Musicians, a Minstrel played string instruments, flutes, drums and related Percussion instruments. They sang popular songs of The Era or Region. They also performed short plays or "skits". Women were allowed to be Minstrels, but only on the "company" of Male Performers.

By and large respected, some Kingdoms looked upon them as "Lower Class", and often banned them (especially Private Minstrels), from performing. In the 14th Century, professional Guilds were formed in some Countries that provided only "licensed" Minstrels, and established a standardized pay scale.

By the end of The Renaissance Era, most Minstrel Performers had stopped. Refinements in Entertainment and musical "styles", had put an end to traveling Performers - for the most part. A period of "revival" developed in the 19th Century, in which Minstrel Performers saw a rebirth. 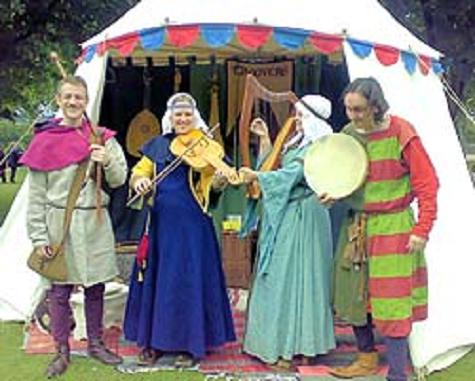