The Minion Cannon was seen in the late 17th  Century as a popular weapon for ship borne cannon. A 3-inch barrel, The Minion was capable of firing a 5-pound solid shot. The “land version” was seen in used during The English Civil War (with an effective range of 800 yards. Barrels ranged from 3 to 5 feet in length. The Minion was popularized by Sir Francis Drake as being a principle armament component for his battles against The Spanish. Most Elizabethan warships would include The Minion Gun. Variations were first brought to The New World by English Colonists to Plymouth Massachusetts. They were a particularly a long lived gun with regards to service. Minions survived (used as Deck Guns) into the early 18th Century (when they were redesigned and became a Saker-Class weapon). 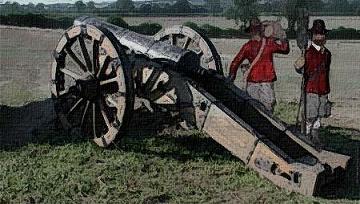