Military Order of St. James of The Sword

The Military Order of St. James of the Sword  (Ordem de Sant'lago da Espana), was a Portuguese Award given at first to Knights who defended Pilgrims in The Holy Land. First Instituted by King Ferdinand II of Leon in 1170 AD. In 1789, The Award was made for bestowment on Civilian achievements as well. The Award consisted of a Livery Chain made of Emerald Wreaths interspersed with Ruby Crosses of St. James. The central Pennant was a much larger James Cross. In the 18th Century, a Chest Badge was fashioned, consisting of a Gold Sunburst pattern Shield with a smaller Ruby James Cross. In the 19th Century a Pink Ribbon insignia was developed for more "Modern" use. It is still award in Spain today for "good works furthering Spanish Culture". 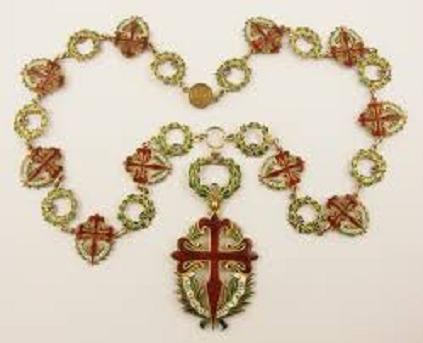