The Military Order of Aviz or The Order of St. Benedict of Aviz (Ordem de Sao Bento de Aviz), was founded by Theresa, Countess of Portugal in 1146. She had been inspired by The Templar Order of Knights. They derived their religious vows from The Rules of St. Benedict. They were one of the few Orders that started out without Papal Authority. They were styled after other military Orders (Knights, Squires and Chaplains). They wore a white mantle-apron with a Green Cross. The Order was instrumental in Portugal's territorial conquests of Africa (known as The African Crusades against The Moors).

In 1383, The Order (backing the successor to the recently dead King Ferdinand), fought a civil war with The Kingdom of Castile (over succession rights). Most of the 15th Century was spent back in Africa (attempting to keep The Moors under control). Although not huge land owners, The Order still managed to acquire a small fortune. However, "earthly treasure" seemed to take over the "spirit" of The Order. They slowly turned away from the more harsher vows of celibacy and poverty. The Order also dropped all other non-Noble ranks in 1604. In 1789, by virtue of Pope Pius VI and Queen Mary I - The Order was secularized. In 1910, Portugal abolished all Military Orders. In 1917, The Order re-emerged as a philanthropic organization that used a military awards system to recognize achievements within their Country. The Order still exists today. 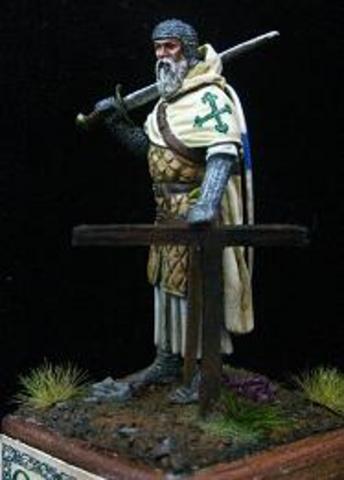