The Military Order of St. Julian (aka Orden de Alcantara), was a Military Order originally formed in Leon, Spain in 1177. Commissioned by King Ferdinand II (Leon), they received Papal Authority from Pope Alexander III. The Order wore a white mantle apron with a Green latticed Cross. What little is known of The Order, is somewhat legend. It is said that Julian de Pererio (a local monk and hermit) - who lived and preached in Salamanca, gave counsel to several knights in the area (regarding engaging The Moors and their constant raids). The loose unit fought and defeated The Moors. This event made it to The King (who formed The Order). Initially aligned with The Order of Calatrava, they had to wear their insignia and follow their rule. Political backbiting caused The King to split the two Orders. They adopted the Green Cross and were given their first Grand Master. At one point The Order operated 53 castles. More "religious" than most Orders, they took a vow of celibacy (at the Popes request). After the Peninsular Wars (part of Napoleon's conquests) of 1807 - much of The Orders properties and finances were confiscated. When Ferdinand VII reclaimed the throne in 1814, very little of their property was left. Still considered under "Royal control", The Pope issued a Bull stating that The Order be restructured to accept him as their head. The king did not contest this (even though King Alfonso XIII became Grand Master). With the fall of The Republic in 1931, Rome forbade Royalty from becoming Grand Masters (even though never "officially" enforced). The Order still exists today as a religious/philanthropic organization. 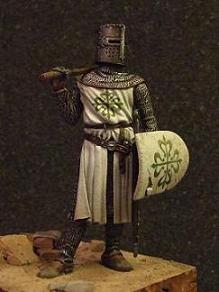