The exact historical origins of The Military Baton are obscure. Many Historians however, place the use of this ornamental piece of symbolism with Ancient Rome. The Baton, was a symbol of status within The later Empire. Given to Legates (Administrators), it represented their authority given to them by The Emperor. Later, Ceremonial Maces such as The Bulawa evolved from The Military Mace.

Traditionally, a Military Baton was given to a Military Officer that had achieved the Rank of Field Marshal. These positions were higher in Grade that even that of a General Officer – and were used to distinguish such visibly. In design, a Military Baton can be roughly 1 to 2 feet in length. They were very ornate in design and often bore some Imperial or Royal embellishments. Most often, Field Marshals were appointed by a King or Emperor.

Martial Batons were made of wood (often expensive varieties) - and laminated. Depending on The Maker, they were extensively painted and often embellished with precious stones, jewels and fine metals. The use of The Military Baton was a common feature during The Napoleonic Wars – especially in France (although England also used Batons). The practice eventually grew obsolete to a degree – only to be revitalized in Nazi Germany. Many Field Marshals in The German Army carried Batons as a symbol of their authority.

Batons are often confused with ''Swagger Sticks'' and Riding Crops (both of which were used somewhat in the same fashion (namely a Hand Salute). Since the 1950s, Great Britain still retains this Military custom with a select number of Field Marshals (the last being in 1997). The Baton was also adopted into smaller Rank insignia and other related military identification in some Countries. 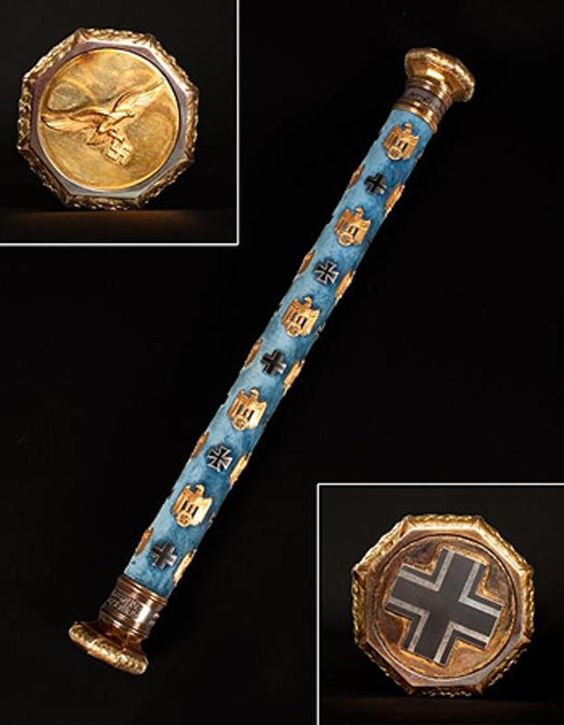