The Banner of Mexico's independence from Spain, the so-named "Three Guarantees", were the fundamental rights claimed (and denied), to Mexican Subjects of Spain. First unfurled in 1821, the "Three Guarantees" were: Independence, Supremacy of the Church and an Equality of Classes. The Revolution Banner was a vertical striped design. The Upper Right Quadrant Stripe featured a White Star (centered). The Green Center Stripe featured a Red Star (closer to the Hoist). Finally, a White Stripe was placed on the Lower Left Quadrant. This featured a Green Star (also next to the Hoist). In the center of the Green Stripe, was a Total Crown. The "Three Guarantees" were placed on Spanish, encircling The Crown. The Banner was used as the unofficial first Flag of Mexico until 1824. 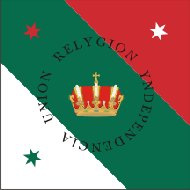