A type of 3rd Century B.C. Greek War Javelin (as we have discussed in a prior Article), these were principle throwing (ranged) weapons used by Ancient Greek and Regional people's. Whereas a traditional Javelin was made of Regional wood (and made to throw at height – as a Spear), The Mesangylon was made of iron. Heavy at 18-Pounds, it required an attached long leather strap. Practice in deployment required using the initial overhand “throw” to be stabilized by allowing the “strap” to help guide the weapon to the intended target. It was considered a “Shock” weapons and was often used by Heavy Infantry Troops. It is speculated that The Mesangylon was the principle driving force in Rome's development of their iconic Pilum Spear. 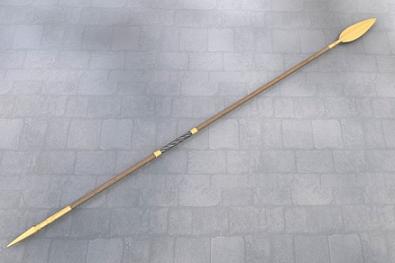