The ''Mercurius Civicus'' was an example of an early ''political propaganda'' Newspaper – first printed and circulated in the year 1643 AD. The ''Civicus'' was in reality a single large sheet, folded four times – to create a pamphlet. Created by Parliamentarian Supporters in opposition to King Charles I and His ''Royalist'' Followers, it would become a mainstay during The English Civil War. It was also a first example of an illustrated paper, often using politically satirical pictures to express viewpoint. Owing to the rise in English literacy, the ''Civicus'' was widely read and helped advance The ''Roundhead'' Cause. The ''Civicus'' would be published until the end of The The First Civil War in 1646. 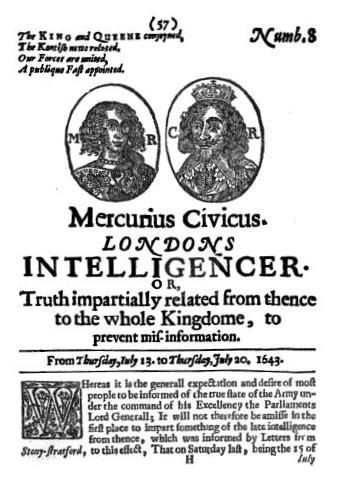