In their most basic form, a "Man at Arms" was seen as a Professional Soldier (but not a Knight). They "hired" themselves out to Nobility or Royalty. Later seen as "Mercenaries", the primary difference was that a Man at Arms was "loyal" to his Employer (and often remained such). Expertly trained, when not fighting, they often served as "Teachers" of the "Science of War" to a Noblemans Male Heirs. In combat, Men at Arms often fought with othersome of their Profession. They could also serve as Leaders of Common Soldiers (Melee Troops). Due to their status as being well paid, they could afford the best Armor and weapons. They were first seen in Germany around the 13th Century. By the 15th Century, most Men are Arms had evolved into structure Mercenaries. They were the prevalient Military Force during most of Medieval Italy's Civil Wars. 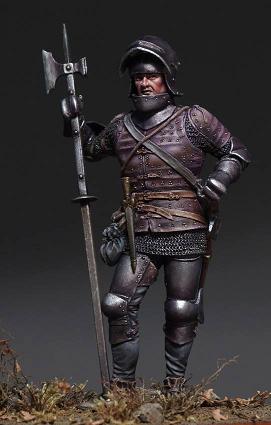