As we has seen in previous Articles, Food Preparation was quite different in The Middle Ages. Most food consumption and it's preparation was regulated to both ''where'' One was and of course, the control of The Church. A common fare today is Seafood. It was so in The Medieval Era – but did involve a somewhat different approach.

While ''Seafood'' today is thought of as Fish, Lobsters, Shrimp etc. ''Seafood'' meant Any form of waterborne Animal (with a few exceptions and again to what Region that One lived. Naturally, Coastal Communities thrived on The Sea as it's main source of nourishment. Even various Marine Mammals could be listed as Seafood to a hungry 13th Century AD Person.

In additional to Fish – Whale and Porpoise might find their way onto a Menu. The Marine ''Bird'' known as a Barnacle Geese was seen as edible (and not against any Church Fasting Regulations enacted on Holy Days). The Bird was thought to come from ''barnacles'' (under water). The Church was skeptical on this ''Critter''. Great pains to examine barnacles found no form of ''embryo'' (fetus). Despite a half-hearted attempt at banning The Barnacle Goose, it was still accepted as Seafood to the 15th Century AD.

Cod and Herring were popular to The Baltic Nations in The Middle Ages, and huge ''Cottage Industries'' developed from their harvesting and preparation (salting). Around The North Sea, Kippers were eaten raw (as an excellent source of protein). Smoking (curing) of Fish was known, but was seen as labor extensive and expensive. However, Smoking of Fish was a popular food dish in The Eastern Imperial City of Constantinople.

Closer to Shore - Mussels, Crab and Scallops would be consumed with great relish in the 16th Century. The common freshwater ''Lobster'' known as The Crayfish was considered a form of meat and allowed to be consumed on Holy Days.While Eels were seen as an issue by The Church, The Lampreys Eel was not. It was consumed where available. As long as it was NOT ''Animals of The Land''.

While Fasting from Land Meat is biblical in context, it was in the 3rd Century AD that St. Basil of Caesarea formally codified it's use among the Early Church.. In the 8th Century AD, Pope Nicholas I has been linked to the theory that the consumption of Seafood of Holy Days was a means of forcing the masses to purchase fish from concerns owned by The Church. This is still debated. 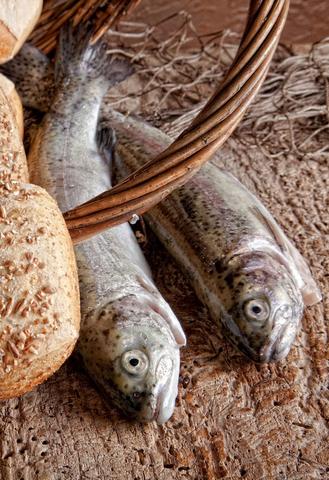