Food is a binding force in most cultures. This was the same during the Middle Ages. Food groups were often divided among the poor and rich. Lower Classes (Peasants), fed themselves on lower (poorer quality food stuffs). The Upper Classes (Noble), ate foods richer in taste diet. Cereals were a major staple of diet. Barley, Rye and Oats were at the top of the list for the Lower Classes. Whereas the commodity  of the Upper Class was wheat.

Cereals were turned into the breads, gruels and porridge of the day and consumed. Oddly, Pastas could be consumed by all facets of society (depending on where you lived). The Fava Bean and any form of vegetable was readily consumed by both classes if available. Meat was an expensive commodity. Mostly coming from domestic fowls and game - it was a food only consumed by Nobility. Pork and chicken were popular among the "landed Gentry". Actual beef cattle was a rarity. Cattle required a large investment in land and additional resource supplies. Few Nobility at the time would have wasted the expenditure.

Most fishes (again depending on where you lived), would be consumed by both Classes. One also had to take into consideration the various Church and religious requirements placed on diets. Therefore, most aquatic life would have been an excellent sources of protein. Actually, beaver tail was considered a delicacy.
Food was also a tool of control. In times of plague, famine or sickness - when food stocks ran low, a Nobleman or Lord would feed his subjects from his ""private stocks". This created something owed. Besides, your Peasants may have to fight for you someday......

Transportation of food products was slow and very expensive. The only form of food preservation was by pickling, salting or drying. Most preserved items could therefore only be afforded by the wealthy. With the advent of the Middle-Class of society, a meshing of all different types of food stuffs formally reserved for a specific class began to appear. The importation of spices used to make foods taste better would eventually find their way into everything.
The 13th Century also various Sumptuary Laws. These were established to govern just what a person could or could not eat. Again, most of these Laws were created by The Church. One wonders how devoutly a Nobleman or his family followed said laws (especially behind Castle walls).

By the late Middle Ages, food began to evolve somewhat as trade became more reliable. Spices, vinegar, sweet/sour sauces, black pepper and ginger - all became the rage (for certain classes). Almonds were very popular as a thickening agent and even milk was created. Generally there were 2 meals consumed a day (as observed by Nobility). A dinner offered at mid-day and a lighter supper in the evening. Naturally, the labor ate a form of breakfast (one had to work in the fields, etc). Breakfast was considered appropriate for children, the Elderly or the sick (and The Church had a say in this too). Breakfast was considered a weakness for Nobility (after all, they did no manual labor).

Often the elaborate "banquets", we have been told of - were a rariety and did not happen with great regularity. Excessive food (which led to drink and immoral activities), were frowned on in polite society. Small meals or snacks were consumed by Nobles as well (The Church of course, did not like this either). Meals were often considered a communal event. The Noble would have his family and any guests (as well as servants) eat together. It was probably a fair bet that servants ate in an adjoining room. They would have to be watched so as they did not try to take leftovers. After all, rich foods may cause a lowly man to aspire to other things! 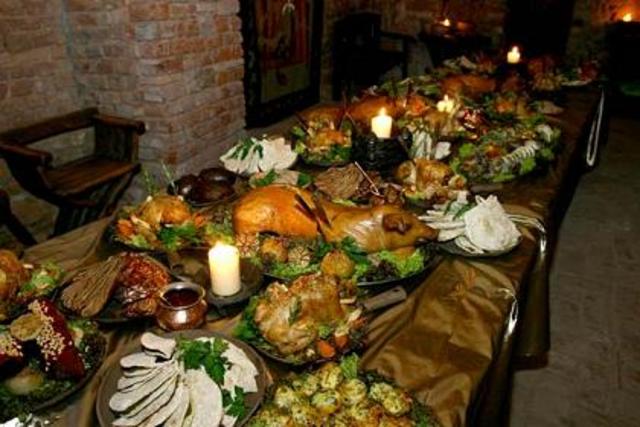