A common Medieval device used for celebration of various seasonal functions, The Maypole was a staple of culture and life in many European Countries. Traced to Germany and surrounding Regions, it's exact age as a ceremonial celebration is still unknown. The Maypole did come to England around the mid-14th Century AD, and has remained a focal point for ''May Day'' Functions. ''May Day'' gave ordinary citizenry the opportunity to participate in Spring related celebrations, often involving many new flowers (opening after Winter) and feasting. The Maypole was often a large, single tree made of Spruce or Pine (in England). Centered and erected at a Common Field withing a Village or Town, The Pole was decorated with fresh Spring Flowers. Affixed to the top of the Pole was a series of long ribbons or ropes (again decorated). The primary goal was for people to dance in a circular pattern around The Pole, often singing and cajoling with ''great relish'' (as per English Writer Geoffrey Chaucer).

After ceremonies were concluded (which may go on for days of feasting and drinking), The Maypole was taken down. It's erection site would often be reused next season. In some Cultures, Maypole would eventually be replaced with permanent metal Poles (of which some Countries still use The Maypole for the time-honored tradition of celebration). 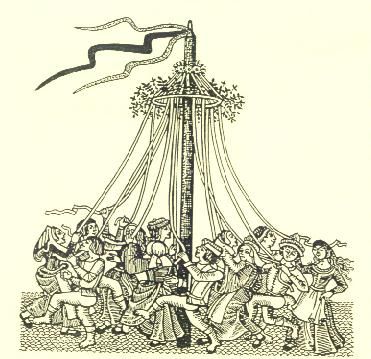