Located in Nagano, Japan – Matsumoto Castle is also known as “The Crow Castle” (due to it's black hued interiors – similar to the color of a Crow). The Castle was built around 1590. The Castle was the seat of power for the Regional Shogun (for about 280 years). Built on a massive stone hewn rock, a local river was diverted to create the 60 foot deep (3-sided Wet Moat). The central Donjon consists of 7 floors. Although considered a “residence”, because of the Owner (a Shogun), a small garrison was kepy available at all times (numbering 200 and living on the very lowest levels). Although originally not designed for firearms (or cannon) use – by the 17th Century, renovations were made to include small arms Wall Loops and platforms for small caliber cannon. Vacant from the mid-18th Century, by 1872 – Matsumoto Castle was so badly neglected, that it was leaning dangerously to one side. Although plans to demolish the Castle were advanced by 1915, locals took it upon themselves to raise funds privately to attempt a partial restoration. By 1952, Government assistance came to Matsumoto Castle. The Donjon has been renovated many times since the 1950s. Currently, the Castles houses an impressive collection of Medieval Japanese Armor and weapons. 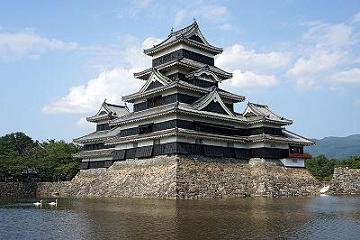