Created in the 11th Century AD, possibly in Essen, Germany – The Cross of Mathilde is a Religious Processional Cross. Processional Crosses were used in common Open Masses (to mark the start and ending of Services), as well as other important Holy Sacramental Rituals. Such Crosses were also used during Enthronement of a Monarch (to show their relationship to The Divine). The Mathilde Cross was named for The Abbess Mathilde (Grand-Daughter of Emperor Otto The Great). It may have been created to honor her passing (death) in 1101 AD).

Actually forming three Crosses, along with The Mathilde Cross was added The Cross of Otto and The Cross of Theophanu. The Cross is 18-inches tall and 12-inches wide. Made of Oak, it was covered with Gold plates. Fine Gold and Silver Filligree wiring was added and formed into complex and intricate designs and patterns. Pearls and other precious Gem Stones were also added. Surviving War, Fire and rebellion through the Centuries, The Cross was restored several times between 1904 and 1950. It is currently kept at Essen Cathedral. 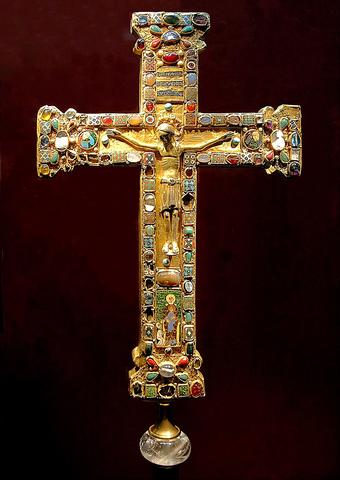