The Mast (or series of Masts), were arguably the single most important component of a Ship, next to it’s Sail so and Rudder. Almost from the beginning of Ship Building, Masts were needed to support Sail Pattern, to harness the very cause of a Ships propulsion – The Wind. Masts (single or multiple), were prior to and including the 16th Century, made from single pieces of Tree. The Conifer was the most sought, due to it’s overall height and strength. Once cut, The Mast was hand shaved into a smooth composition. Mast carving took effort and time. Once mounted on a Vessel, a typical Mast may last the operational “life” of a Ship.

After the 16th Century, it became more feasible to construct Masts in large sections. Held together by Ring Stays or Iron Bands, these components were “glued” in a fashion. This allowed for The Ships Carpenter and Crew to replace the critically damaged section without putting into a Port for a major repair.

There were specifically (4) components to a typical Mast System. The Topmast (Top point), The Foremast (Closest portion to the Front of a Vessel’s Front or Bow), The Mainmast (or primary and largest portion) and The Mizzenmast (The shorter components of the Mast Set-up). These were also sub-divided into other named portions, often related to different Ship Building styles by different Countries.

As early as The 7th Century BC, Ships of used primarily (1) Mast – centered on the Main Deck, as the need for more power (Wind) was needed, an additional Mast was added, both using ever more complicated Sail Patterns to gather the most of the Wind current. The evolution of the 3 to 6 Mast Ships of later centuries came from these ancient Vessels. Some Historians cite that Ancient Rome may have even created a 50-Mast System (although the sheer size of such Ships would have been enormous).

Solid wood in construction, by the mid-19th Century, attempts at Hollow Masts were attempted in which repair would also be made easier as well. These also were “glued” components. 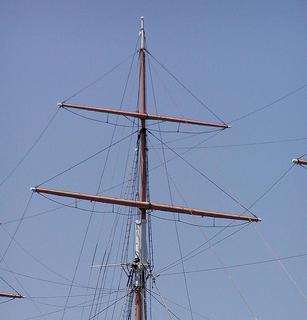