As we have seen, female Pirates - while rare, did exist. A few were as cutthroat and driven as their male counterparts. One in particular was Mary Read. Mary was born around 1690 in England. Her Mother had an affair with a Sea Captain. When her husband died at sea, she thought she would be able to marry her child's "real" Father. He refused to marry her (leaving some to believe he wad a man of property). Mary and her Mother grew up destitute.

In 1715, Mary came up with a clever idea to make money. She cut off her hair and bound her breasts. Joining The British Army, now "Mark Read" fought in The Dutch Wars of Succession. "He" eventually fell in love with a Fleming soldier (revealing his secret). The two left the Military and brought an Inn. Unfortunately, her now "Mary" again, get husband died of "consumption". Mary decided to sell the Inn and travel to The West Indies (again disguised as a man). In 1720, her Ship was attacked by the notorious Pirate John "Calico Jack" Rackham. "Mark" joined his crew. Mark proved to be a daring and ruthless Pirate. Cutting a "fine figure", Mark became "noticed" by Rackham's girlfriend - infamous female Pirate Anne Bonny. It is said she fell in love with "Mark".

Rackham at first saw no harm in the flirtation. But as time went one, he became angry at Anne spending to much time with Mark. When Anne "pushed" the issue for a "physical relationship", Mark had to reveal his true identity. Historians recount that Anne got "a good laugh" out of the deception. She told Jack the truth (as it was apparent he was about to kill Mark!) Now "outted" as it were, Mary, Anne and Jack went on to rob and kill many on the Caribbean High Seas. Unfortunately, after a particularly fierce fight with a Schooner  (which they took), Jack and Anne got drunk and celebrated their victory  (without leaving the scene of the crime). It was said Mary wad venomously against this. They should gave listened, for they were spotted by a British Man of War and captured!

All three (and the crew) were tried and convicted. The Admiralty Court in Jamaica had not quams executing a female Pirate. Jack was hung, sure enough. Anne and Mary had a different story. Both women testified that they were pregnant with Jack's child! The Court commuted their sentences until after they gave birth. They were both locked away. Anne's fate is known. Some say her influential Father brought her freedom and took her to The Colonies (America). Others, that she died in Prison. Mary did die in Jail and was buried in Jamaica. Strangely, no record of her child's birth was recorded, so many think they both died in childbirth. 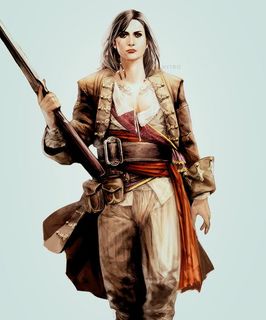