Martha Jane Canary holds a unique spot in American Western History. At a time when the “Heroes” of The West were Males, she was among the few Females whose “adventures” stood out and continues to. Although many who hear her name do not recognize it, they do when she is referred to by her nickname…..”Calamity” Jane. Jane was born in 1852 in Princeton, Missouri. She had 6 siblings. Her Father was a Gambler (and not a good one) and her Mother was rumored to be a Prostitute. Around 13, Jane’s Mother left the Family. Her Father moved the Family to Salt Lake City, were he purchased a 40-acre Farm to provide for his Family. Unfortunately, he died a year later, leaving a 14 year old Jane as Head of the Family. She moved her Brothers and Sisters to Ft. Bridger, Wyoming. She took work as a Washer Woman, Cook, Dance Hall Girl and even Prostitute. By most accounts, Jane was said to be “attractive”. She was illiterate (being unable to read or write).

Leaving her Family in the custody of Friends, Jane turned to the “harsh” life of The Prairie. Becoming an Expert Horseman and “crack” Shot, the lifestyle quickly weathered and hardened her good looks. Jane took to wearing Men’s Clothing and adopting a Masculine persona. It was from this the legend of her nickname grew. Many Historians debate the origins of her nickname. Some cite that it was given to her by The Army (of which claimed she was a Civilian Scout), others by none other than Jane herself. Myth States that Jane brokered no disrespect from Men. As such, many would poke fun of her “Manly” appearance. It was said that such insults would “court calamity”. Hence her name “Calamity” Jane. However, much of Jane’s origins are debated. While she did work as a Buffalo Hunter and Skinner – supplying meat to The Army, many disclaim her service as a Civilian Scout. Jane claimed to have Scouted for Colonel Custer and others. Jane was looked upon by many as a Liar and teller of “Tall Tales”.

Her “Scouting” and Buffalo Hunting had her end up in the infamous Town of Deadwood, Dakota Territory (present day South Dakota). There, she fell “in love” with famed Bounty Hunter, Scout and part-time Lawman James Butler “Wild Bill” Hickock. In this, her Legend takes off. Hickock claims that while he “liked and respected” Jane, he was married and not in love with her. However, thanks to Hollywood Films and Books, this “love affair” became the hallmark of both their Histories. It was Jane who became “unhinged” when Hickok was shot and killed in a Card Game in Deadwood. Grabbing an Axe, Calamity went looking for his Killer for revenge. It was The Hangman who would win out ultimately over the Murderer).

Jane remained a fixture in Deadwood for many years. She continued to indulge in her lifelong issues with alcohol. She was hired by Showman William “Buffalo Bill” Cody as a “Storyteller” (Narrator) with his Wild West Show  (briefly). Cody was said not to be a Fan of Jane, but capitalized on her “relationship” with Hickock. In her later years, The American West had quickly disappeared with Modernization. Jane as an Old Woman worked in a Brothel as a Washer Woman  (even allegedly as a Prostitute again). However, years of hard life and drinking caught up with her. She died in 1903. It was with her demise, her Legend took to leaping bounds. Having more money to be buried, an unlikely Benefactor in William Cody came forward. He had Jane buried next to Hickok in Deadwood. Some say that Cody never quite believed Hickok’s denial of a relationship with Jane. As the ultimate “joke”, Jane and Hickock remain side by side. 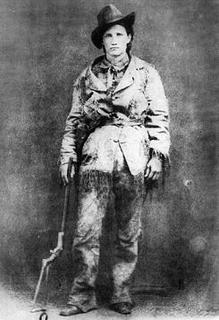