No Medieval Jester would be complete without his Marotte. The Marotte was a hand prop used by the Performer, very much as a Puppet would be. Most Jesters (and later Clowns), used a form of the device. Seen around the 13th Century, The style of using a Marotte was developed in Spain, Italy and France.  Their design was simplistic. Construction consisted of a wooden handle held stick or pole, roughly no more than 3-feet in length. At the top, either a Dollar Head or semi-Doll Body was attached. These may or may not have included small "Arms". Most Countries had their own particular style of Marotte.

Often the Performer (Jester), commissioned his own likeness made into a Marotte. Thus was used as part of his "Act". Although Ventriloquism was not practiced (it would have been seen as Witchcraft), the Performer would create another "voice" for his Marotte and interact with it. In addition to his likeness, The Marotte was dressed the same as the Performer. Heads were made of painted wood (carved), and later Ceramic. To add to the "visual spectacle", most Handles to a Marotte were brightly painted and decorated. This would also include long colored ribbons or straps of cloth. Many have not survived into today's time, but those who have, often show a surprising level of detail.

In the late 17th Century in England, Marotte saw a revival. Political Cartoonists "created" The Marotte images of "Punch and Judy", based in part, on street performers using Marottes (very much as Marionettes). Often, they represented opposing Government Houses, failing to agree - or one House "bullying" the other into "submission". 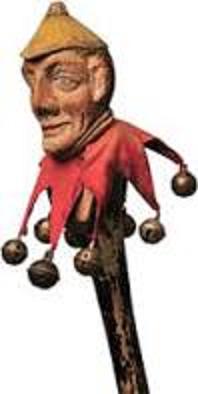