]The traditional weapon of the fierce Maroi Tribe of New Zealand, The Mere Club is an unusual weapon (in both shape, size and usage). Possible thousands of years old, The Mere has not really changed in design or construction. Basically a Club, The Mere is paddle-shaped. The body of the Club can be between 10 and 20-inches in length, with a 3 to 5 inch body width. The one-piece construction is tapered to a handle at the end. Normally, a hole is carved in the handle for the attachment of a leather tong (which can attach to the User's hand). Regional hardwoods, bone and even stone could be used to make a Mere. The preferred choice of Quartzite (with a Greenish hue), was highly sought for construction. Once cut into the tradition (rough shape), sand and water was used to “grind and finish” The Mere (making it smooth and free from rough edges). Although a Club, The Mere was used primarily as a thrusting and jabbing weapon. They weighed around 5 to 8 pounds). Actual “clubbing” was restricted to the rear Mere handle (also used in a thrusting motion towards the head). Although used this way, European contact did tell of Meres being used as a “traditional Bat or Club” - with the Welder using the much broader body to crush enemy skulls! It this “use”, The Mere was very much like a traditional Axe. They were “worn” suspended from the leather tong handle, from a leather belt (much as a sword). A highly stylized deployment and movement was “taught” with Mere use. It is still the traditional weapon of The Maroi Tribe (and is even featured in their National Colors). 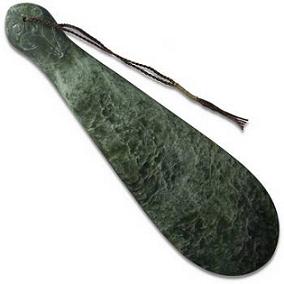