Located in Baniyas, Syria - Margat is another surviving castle that was at one time garrisoned by The Military Oder of Knights Hospitaller. It is located near the Mediterranean Coast (necessary for re-supply in those times). Constructed by Muslim forces around 1062, it was originally garrisoned by them. It's commanding location (possibly part of an extinct volcano), was ideal. The Muslim forces held Margat throughout The First Crusades. When the region was captured by Byzantine forces as a result of their victory at The Battle of Harran in 1104, Margat fell to them. Margat was captured by Crusader forces in 1170. In 1186, the castle was ourchased by The Hospitallers. After many repairs and renovations, Margat became their main headquarters in Syria.

In 1188, after the fall of Krak de Chevaliers to Saladin - his forces marched to take Margat. However, it's reputation for being "impenetrable", caused Saladin to rethink a siege,  and he by-passed it. By the 13th Century, Margat became a major seat of financial gain to The Hospitallers (who made monies off the passing pilgrims needing food and supplies). In 1281, The Order tried to send troops to assist a Mongol invasion of Syria (against the Muslims). Unfortunately, their plan never came to be. The recent defeat at The Horns of Hattin cost many Crusader (and their Allies lives). The attempted move against the Muslims angered them. An army was raised. After a 38-day siege, The Hospitaller forces had to surrender Margat, after Muslim engineers and sappers had succeeded in undermining the walls. They were allowed to leave "with honor" and without having to convert. They were allowed to carry with them "all they could carry".

Control of Margat eventually fell to The Mamluks. They garrisoned it until the 15th Century (when The Ottomans invaded and took control). Margat became their seat of administration for the region. It was formally returned to Syria in 1884. Margat (in it's prime),  featured 14 defensive Towers and a massive Bent Entrance. A secondary Gatehouse was attached behind this. Although considered a Concentric pattern design, it also is classified as a Spur Castle (a structure built on an extension of mountain creating a jutting defensive overlook). Margat also has an Outer Bailey system and a Donjon style central structure.  It has been speculated that in it's "heyday", Margat may have been able to support a 1,500 man garrison. Badly damaged from hundreds of years of neglect, it has - as of 2007, been undergoing renovations. It is not available for Public view. 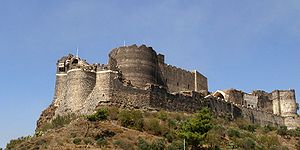