The Taiaha is the traditional weapon of The Maori Tribe of New Zealand. Part Quarterstaff and part Spear, it was a simple but very effective close quarters weapon. The Taiaha dates to the 14th Century and was the main weapon of a Maori Warrior. Made of regional wood or in some cases whalebone, The Taiaha was roughly 5 to 6-feet in length. It was used as a Club, Quarterstaff and Spear. In Spear terms, unlike a traditional Spear composed of an attached metal or related head, The Spearhead of The Taiaha was wooden and carved from the overall construction of the weapon. Well sharpened, it still served the same function as a traditional spear very well nonetheless.

Training with The Taiaha was very intensive, with young boys in the Tribe beginning around 15. Training versions were made of fashioned reeds. It took great time and skill to fashion a Taiaha, into which a Warriors ''fighting spirit'' was supposed to dwell. A Warrior would rather perish in battle that loose his Taiaha. With European contact and the eventual conflicts that The Maroi would encounter with Colonists, Warriors quickly adapted European firearms into their warfare. The Taiaha is still recognized however as a Tribal image of Maori Culture and Warrior ethos. 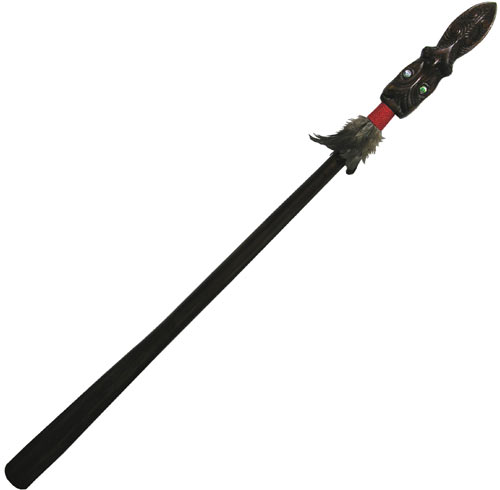